I will not leave my post until the epidemic is lifted

Since August 30, some of the surrounding counties (districts) in the Jingkai District regular full nucleic acid screening found a number of positive cases. In order to achieve the goal of "not losing control of the epidemic, not losing speed of the economy, not losing security" in the region, the Jinggangshan Economic and Technological Development Zone Epidemic Prevention and Control Command issued a notice on September 3, requiring all enterprises in the area to implement the "three no's" since September 4 at 8:00. Only out and not in the fully closed management.

After receiving the notice of closed management, the company responded at the first time. Under the unified coordination of general manager Yao Xiaodong, all the staffs cooperated efficiently and made the company realize the "epidemic prevention" and "production" in this special period in the form of working at home and returning to work. In this special period, the company has realized "disease prevention" and "production" with both hands. In this war without smoke and mirrors, Jiansheng people wrote a story of Jiansheng people's anti-epidemic with their own actions in the spirit of selfless dedication!

I. Emergency mobilization and all-out efforts

After the meeting, the emergency management program was started immediately, and the personnel of the emergency team for epidemic prevention and control work were fully committed to their respective duties and started their work immediately. By 12 o'clock that night, under the leadership of the general manager of the company, the group personnel had completed a series of necessary pre-preparation work such as the arrangement of the epidemic prevention site, the procurement of epidemic prevention supplies, the procurement of living materials, the notification of personnel and the allocation of dormitories, etc., and were fully prepared for the closed management of the company starting the next day.

Secondly, the post stood firm and blossomed against the traffic

Although the sudden epidemic caught everyone by surprise, every employee of the company knew the truth that "fighting the epidemic is indispensable and protecting the production is urgent", and more than 60 employees did not hesitate to return to work after receiving the notice from the company. Stick to their posts to do the epidemic retrograde, he (she) overnight to pack toiletries and change of clothes, bring their own mattresses, at 7:00 a.m. on September 4, when the Red Army's husband sent his wife, his wife sent his husband, his boyfriend sent his girlfriend's touching field again presented at the company's front door, they help their own families to move and send daily necessities, exhortation to work at ease, home with my words, resounded through the land of Jiang Sheng. All the personnel who accept the closed management arrive at work in advance.

The company's staff dormitory conditions are limited, in the face of some employees can not arrange the bed problem, we did not complain, listen to the company's unified arrangements, and take the initiative to think of solutions, a time office, meeting rooms have become a temporary lounge, lunch beds, sofas, conference tables have become a temporary bed for everyone.

Third, online office, the war on the epidemic has me 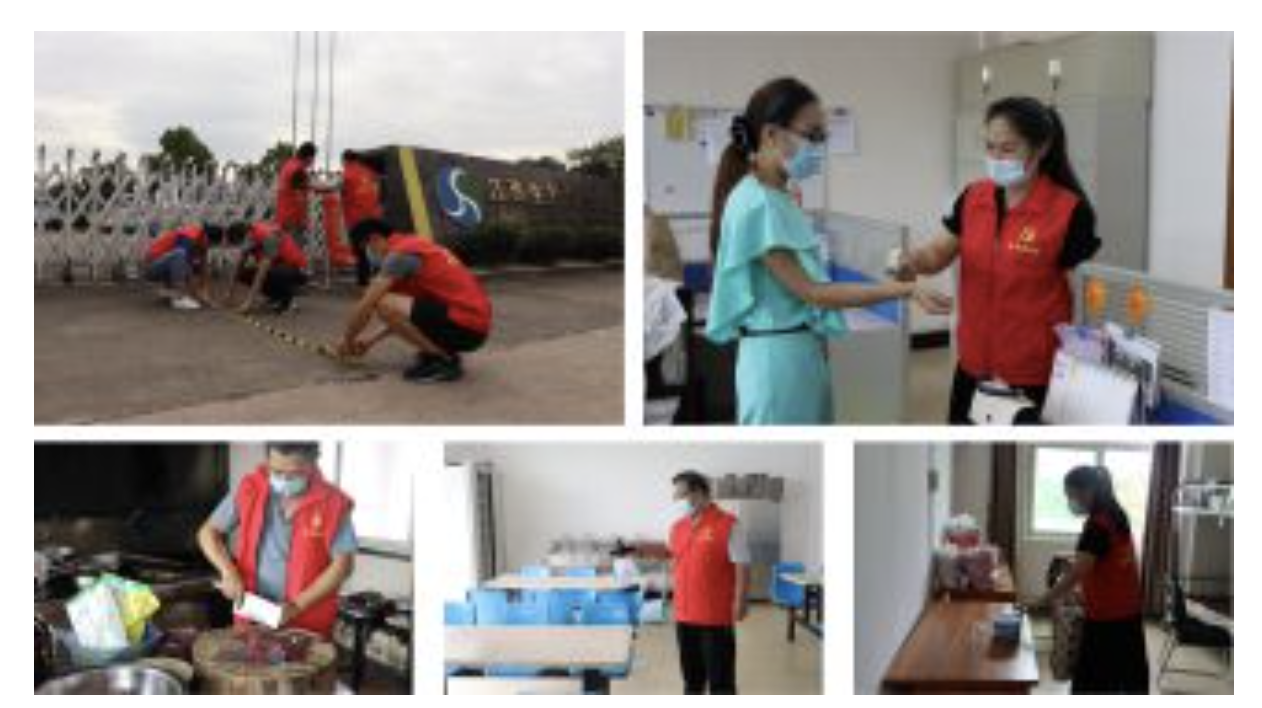 (Party members do all the security work)

"Epidemic current, party members forward", in the knowledge that the company will soon be closed management began, the company's party members took the initiative to give up vacation requirements to return to work, they are under the unified leadership of the party branch, in addition to do their own work, but also took the initiative to undertake most of the logistical support work, they orderly division of labor, help colleagues carry luggage, responsible for the distribution of masks, They help colleagues carry luggage, distribute masks, distribute daily necessities, measure body temperature and disinfection. In the case of insufficient staff in the canteen, they took the initiative to help cook and carry supplies to ensure good logistical support, and wherever there is a need, the party members can be seen. On the other hand, in the company's all-employee work group, branch secretaries and members kept passing the instructions from the higher party committee, the prevention and control command as well as the company level to keep the employees informed of the epidemic situation. They also urged the employees to strengthen their protection, guided them to have a correct understanding of the epidemic, not to blindly believe in rumors, beware of being duped and eliminate their tension.

The epidemic has not yet been eradicated and the situation is still serious, but we believe that as long as we all work together to fight the epidemic, victory will eventually belong to us! Here again, we call on everyone to fully cooperate with the epidemic prevention and control, and do a good job of protecting ourselves while keeping the production, and thank every employee for their support to the company.

"The epidemic is our responsibility, we are here to fight it!

Respect to all of you who are at your posts!

To those of you who work at home!

To those of you who volunteered for prevention and control!